“Now fear the LORD and serve him with all faithfulness. Throw away the gods your ancestors worshiped beyond the Euphrates River and in Egypt, and serve the LORD. But if serving the LORD seems undesirable to you, then choose for yourselves this day whom you will serve, whether the gods your ancestors served beyond the Euphrates, or the gods of the Amorites, in whose land you are living. But as for me and my household, we will serve the LORD.”—Joshua 24:14-15 (NIV)

Pastors like to base sermons on Joshua 24 because it’s “preachable” … easy to prepare for, easy to deliver, a feel-good, warm-and-fuzzy that’s easy for us to understand–especially the favorite line upon which most ministers focus, 24:15: “Choose this day whom you will serve, whether the gods your fathers served in the region beyond the River, or the gods of the Amorites in whose land you dwell.  But as for me and my house, we will serve the LORD.”

But as for me and my house, we will serve the LORD.

What wonderful words!  Such special sentiments!  A personal, powerful statement of testimony, commitment, and covenant between the created family called of God and their Creator.

But, let’s put this passage into context:

After their years of slavery and servitude in Egypt, God used Moses to free Abraham’s lineage from its bondage and lead the tribes of Israel across the wilderness and into the promised land on the other side of the mighty river.

It wasn’t an easy journey and the people groaned and grumbled along the way.  More often than not, they took out their frustrations on Moses, complaining about one thing or another.

Yet, it wasn’t God’s plan for Moses to be the one to bring his people into the land flowing with milk and honey; that honor was passed onto Joshua, who succeeded Moses as the leader of the Israelites.

Not only did Joshua have to conquer the idolatrous people inhabiting the land, he had to deal harshly at times with his own people’s idolatry.

“You are not able to serve the LORD, for he is a holy God.  He is a jealous God; he will not forgive your transgressions or your sins,” Joshua warned.  “If you forsake the LORD and serve foreign gods, then he will turn and do you harm and consume you, after having done you good.”

Joshua then tossed out a test to them that continues to challenge us today: “Put away the foreign gods that are among you, and incline your heart to the Lord, the God of Israel.”

Maybe Joshua was asking his people to abandon those lucky charms, rabbit’s feet, and other special ties that were seemingly fortuitous in the past.  Yes, perhaps that’s what they were afraid to give up … you know, just in case the LORD God wasn’t enough to come through and deliver for them.

Though we may laugh them off as merely a bit of supernatural extra insurance that, well, it just doesn’t hurt to have … it does hurt to have them!

Because they are idols!

Joshua knew that the greatest hindrance to faith is our tendency to bow down to the things we create rather than to the Creator when we worship the works we’ve made … often believing that we’re honoring God in the process.

The people of Israel already had begun to compromise with the culture around them by bowing down to gods of the present.  Some of them possessed household gods representing Baal and other gods worshipped by their neighbors.  Those were the gods of the here and now, of the Amorites, in whose land they now lived.  But there are other gods, too, that we’re warned not to worship: the gods of our fathers in Mesopotamia, from where we came.

It is here, I believe, that we must look and root out the foreign gods among us.

Apart from the gods of our fathers, those things we worship from the past, we must be vigilant to guard against the gods of the present, too … church idols and religious trappings which can undermine God.

A church I had pastored couldn’t (or wouldn’t) bond with any of its pastors because none could live up to Pastor Gary, its founding pastor, who had been martyred and turned into a saint after losing a four-month battle with cancer.

Pastor Gary got this church going … and he had a heavy hand.  A very heavy hand in how things should be done and how they shouldn’t.

When Gary passed, a number of people passed with him, leaving the church.  While that hurt the church, it was okay because they were there for the wrong reason: they came for Gary, not for God.

I’m told that Gary got weary of people complaining that he talked too much about stewardship and asked for money too often.  So, Gary’s solution was to do away with passing the offering plates and substituted “giving boxes,” instead.

Years later, a new member asked: “Where are the plates?”  People wanted to give but couldn’t, because the boxes were gone and no plates were to be found.

They weren’t there, I suspect, because the church had made them into an idol to Gary, and took great pride in not passing the plate.

“Unlike other churches, we don’t pass a plate,” we announced week after week.

But what about people who believed we should be passing it around because passing the plate can bring blessings to those of us who have and those of us who don’t.  Just touching a plate of offerings consecrated to God can give power and purpose to those who might not have anything to put into it this week, but want to and can the next.

That’s one of the reasons why most churches pass the plate! 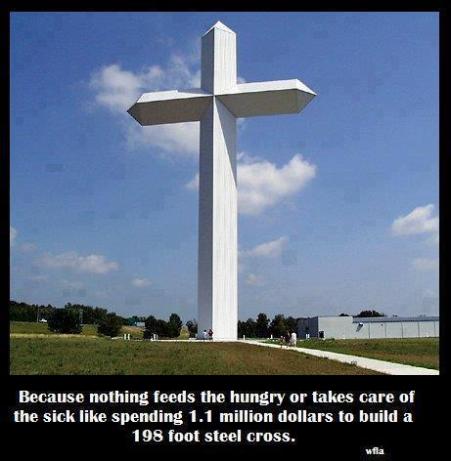 Churches pass the plate via the USPS, too.  We all get fundraising letters and, more often than not, quickly deep-six them into the circular file.

But this one came from church (not the same church) so Russ, my partner, opened and read it.  Although the letter was addressed to both of us, he didn’t show it to me or even tell me about it until the next day.

Instead he stewed over it and did a slow burn … ultimately posting this message on the church’s Facebook page:  “How an appeal letter for a $5,000 banner (really???) can begin with a quote that references banners “that were used by crusading Knights, to rally the faithful” during the most horrific period of Christian history, is beyond me.”

It had been twenty years since this Episcopal church had had a new banner to represent the parish.  The old banner, made lovingly of felt and needlepoint lettering, was beginning to show its age.  With a new priest-in-charge and the consecration of a new diocesan bishop several months down the road, the church believed it an appropriate opportunity to celebrate this time of renewal with a new processional banner.  “Every parish in our diocese will be represented and all the church banners will line the worship space.  We would love to have our new banner there to represent [us],” stated the Altar Guild in its church-wide appeal.

Including shipping (from England), a new pole for display and a cross rod to hang it plus floor stand, the handmade banner would cost some five thousand dollars.

While the opening words of the fundraising letter about “rallying the faithful crusading Knights” were what had rankled Russ given the history of persecution the Jewish people had faced in Inquisitions, Holocausts, Pogroms and Crusades, it was something else that bothered me (when I finally got to read the letter): the banner, I believed, was an idol … one more piece of pomp and circumstance, rite and ritual, that people focus on and pay attention to in the name of God.

I certainly could understand the Altar Guild’s desire to reflect the church’s “renaissance” symbolically through a new banner.

Maybe its existing banner was frayed and torn and not as pristine as some of those others in the processional for the new bishop … but I wondered which banner (new or old) Jesus would feel more comfortable with, given the state of the world and its needs all around us?

For pomp and circumstance, rite and ritual, certainly nothing can compare with the Roman Catholic church—especially when a conclave of cardinals is called to (s)elect a new pontiff. 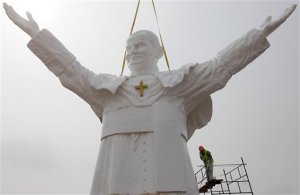 Seriously, do the faithful really need a 46-foot tall statue of the late Pope John Paul II in the historic city of Czestochowa, home to the Jasna Goara Monastery — Poland’s most important pilgrimage site — to spread the Good News?

Let’s not forgot what we’ve been warned about graven images!

The “Pope on a Rope” being heisted goes against strict Scriptural admonitions which remain valid to this day: “You shall not make for yourself a carved image, or any likeness of anything that is in heaven above, or that is in the earth beneath, or that is in the water under the earth” (Exodus 20:4).  Or, “You shall not make idols for yourselves or erect an image or pillar, and you shall not set up a figured stone in your land to bow down to it, for I am the Lord your God” (Leviticus 26:1).  And even the New Testament tells us, “Being then God’s offspring, we ought not to think that the divine being is like gold or silver or stone, an image formed by the art and imagination of man.”

New Pope Francis from Argentina has given people much to talk about as he eschews the traditional vestments and garb accorded to Peter’s golden throne.  Here is a man who washed the feet of captives – Muslims at that! – while preferring public transportation over the “Popemobile,” a wooden seat instead of a gilded cathedra, plain brown shoes over those rich red ones.

These small acts of humility and contrition initiated by the new Roman Catholic prelate may, indeed, be the stuff of “public relations” … but they’re good public relations: small, symbolic steps being taken to offset the hubris often associated with the church and replacing it with grace notes of humility.

Ultimately, I believe, it all comes down to this: How much of our church giving is spent on our own personal preferences and priorities, rather than God’s?

From money and power to politics and the people we approve for public trust or to shepherd us in church, just about anything we hold up and put first in our lives can turn into priorities that we idolize.

If we worship it, it’s a foreign god … and we must get rid of it.

Joshua calls us to a time of contemplation, to remember who – and whose – we are, where we came from, and what the Lord has done for us.  He commanded the people of his day to throw away their foreign gods.

We must do no less than topple the gods that have crept into our own hidden places of worship.

It’s time for us to make up our minds about whom we will serve: God or man, the Lord of creation or what we’ve created?

As for me and my house, we will (try our best to) serve the LORD.

You knew that was coming, now, didn’t you?

Processing…
Success! You're on the list.
Whoops! There was an error and we couldn't process your subscription. Please reload the page and try again.